This is just the equation of a line,

, but the notation used in statistics is different. Similarly to the equation for a line,

is the y-intercept and

is referred to as the dependent variable or response and

is the independent variable or predictor.

When covering the chapter of linear regression, the following kinds of questions are most commonly asked:

This is not a definitive list. Ask your professor or instructor for other types of questions that will be on the exam.
top

Correlation measures the linear relationship between two variables. The sample correlation is represented as

, while the population correlation is represented as

(Greek letter rho). It is important to keep in mind that

, the variables will have the following characteristics:

, the variables have a perfect positive linear relationship. This means that when the variables are plotted on a scatter plot, they will form a straight upward sloping line. When

, the variables have a perfect negative linear relationship. When the variables are plotted on a scatter plot, they will form a straight downward sloping line. When

, there is no linear relationship between the variables. When they are plotted, it will look like either a horizontal or vertical line.

Here are some examples of two variables plotted using a scatter plot and their following correlation:

To cover the following topics, we will be using an example from the video game PlayerUnknown’s Battlegrounds (PUBG). It is a game similar to Fortnite, where 100 players are dropped in a map. The goal of the game is to eliminate all other players using a variety of weapons and be the last one standing. In this example, we will be trying to predict how much total damage a player dealt to other players given how many kills they got in a match. The first step is to write the Theoretical Model:

Some important things to note when writing the theoretical model:

Now we can use either Excel or JMP to run the regression analysis and be able to write the Estimated Model. The following output is from Excel, but JMP output should have the same information. 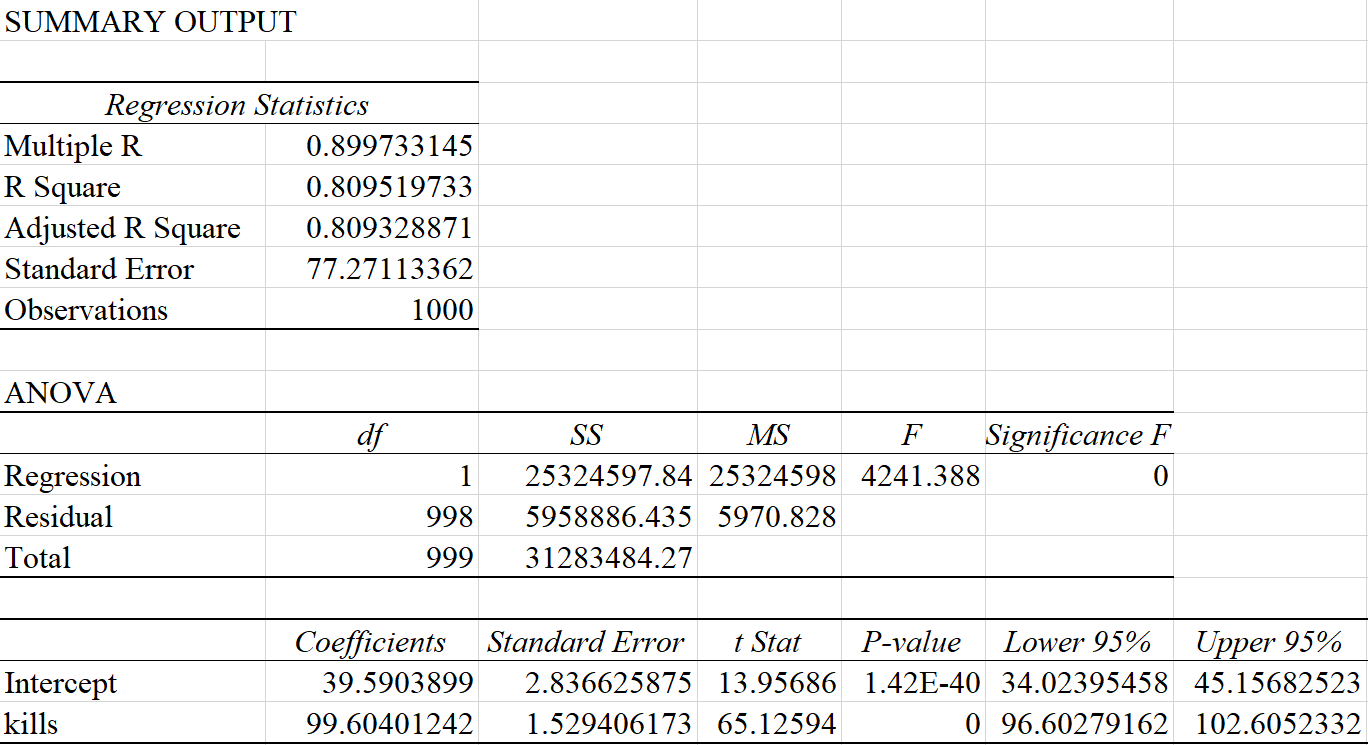 Keep the following in mind when writing the estimated model:

We are usually asked to interpret the slope, y-intercept, and coefficient of determination (

) and in most cases in can be done in a formulaic way. The following interpretations are generalized and will have to be put in the context of the problem.

) is zero, it means that there is no relationship between the variables and the predictor variable is not significant. To evaluate the slope, we can either perform a hypothesis test or a confidence interval. In either case, we should end up with the same conclusion.

Hypothesis test for the slope will all have the same setup:

The test statistic and the corresponding P-Value can be found in the third table of our output.

Note: Sometimes they will not give the test statistic and you will have to calculate it by hand.

Our test statistics is equal to:

Since the corresponding P-Value is approximately 0, we reject the null hypothesis and conclude that

The general formula for the CI is:

Sometimes the CI will be given to you in the summary table. If you are asked to calculate it by hand, most of the information should be given to you in the summary output. The only value that changes will be the critical value, which will depend on the confidence level. After the CI is calculated, we check if 0 is in or out of our CI. If 0 is outside the CI, we conclude that

significantly differs from 0. If 0 is inside the CI, we conclude that

does not significantly differs from 0.

To create the CI, we pull the values straight from the third table in the summary output. For a 95% CI we will approximate the critical value by using 2.

We notice that 0 is not in our CI, so we can conclude that

A residual tells us how much our prediction was off by. We can calculate a residual for every value. If a value has a residual of 0, it means that our model predicted the response accurately. The formula is as follows:

Suppose we are asked to calculate the residual for when a player has 2 kills. In our data set, we observe that a player with 2 kills dealt a total damage of 200. The predicted value is calculated using our line of best fit.